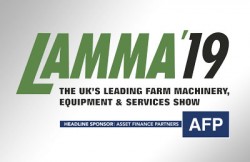 Datatag ID, who power the official CESAR Security Scheme and are long standing exhibitors at LAMMA, will again return to the show at its new home in 2019, indoors at the National Exhibition Centre (NEC) in the West Midlands on January 18th and 19th.

LAMMA, the UK's largest agricultural trade show, attracts over 600 exhibitors and in its new home this vastly expanded show will host the most extensive array of farm machinery, equipment and services ever assembled throughout 11 halls of the NEC.

The award winning official CESAR Scheme will yet again be in full view throughout the show as many leading manufacturers fit CESAR to their equipment as standard including John Deere, JCB, Massey Ferguson, McCormick, Landini, Case IH, New Holland, Merlo, Manitou, Kubota, Amazone, Suzuki and Polaris.

CESAR is made up of state of the art Datatag technologies including the now iconic triangular tamper evident ID plates, Datatadots®, RFID Transponders and forensic Datatag DNA with UV trace. Once a machine is fitted with CESAR it is practically impossible to hide its true identity and in the unlikely event of a theft the police have 24/7 access to the database through the secure contact centre which enables them to positively identify the stolen machine and recover it back to its rightful owner.

The AEA backed scheme now protects over 275,000 items of machinery and due to its proven success in reducing theft attracts insurance premium discounts of up to 20% from companies such as NFU mutual.

Datatag also provides a theft deterrent systems for 4x4's, trailers and power tools protecting an entire farm from theft. Talk to them about securing your business assets for life.