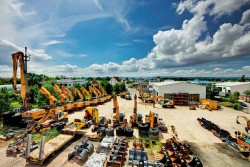 Liebherr, a German company with a widespread international presence, is best known for its range of tower cranes but its product portfolio also includes a broad range of earthmoving and materials handling equipment including tracked and wheeled excavators, wheeled loaders, crawler tractors, crawler loaders, telescopic handlers and large dump trucks. CESAR will be fitted to all Liebherr's mobile equipment from August of this year and fitted on the production lines in their factories.

In the UK Liebherr operates its own distribution company, Liebherr-Great Britain Ltd, which celebrated its 50th anniversary in 2011. Liebherr GB now sells and supports the full range of construction and material handling equipment and operates an equipment rental service, Liebherr-Rental Ltd, which was founded in 2007.

CESAR, the most successful scheme of its type in the world, celebrated its 10th anniversary at Plantworx in June and now protects over 250,000 pieces of construction, agricultural and industrial equipment worth in excess of £15b. CESAR acts as both a deterrent to theft and an invaluable aid to recovery as each piece of equipment is given a unique 'fingerprint', using several layers of Datatag security marking technology that thieves cannot remove.

CESAR has contributed to a 70%+ fall in equipment theft in the UK since its launch however, professional and opportunistic thieves still steal nearly 3,000 machines a year in the UK and cost the industry over £100m p.a.