CESAR IN FULL VIEW AT PLANTWORX 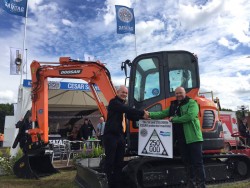 CESAR's 10th anniversary was marked with the cutting of a special birthday cake by the CEA's Chief Executive Rob Oliver along with Datatag's MD Kevin Howells.

Datatag also displayed an NC Engineering site-dumper on their stand and the manufacturer, from Northern Ireland, announced at the show that they will be fitting CESAR as standard to their range. The CESAR marked dumper was positioned for the Savage Skills Stunt Show which was performed on the demo area over the three days, attracting a lot of interest from show visitors.

Alongside the main CESAR Scheme the Plantworx Innovation Award winning MicroCESAR System was also exhibited at the show. STIHL, who announced recently the standard fitment of MicroCESAR to their range of cut-off saws, loaned Datatag two saws - one available to demo on the Datatag/CESAR stand with the second displayed in the CEA's central HUB area.