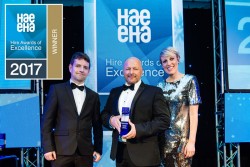 Independently judged, the Hire Awards of Excellence acknowledge the successes of hirers and suppliers, along with the incredible individuals who set the standard. Without doubt these Awards are the most sought after accolade within the plant, tool, equipment and event hire industries and represent the best in class for companies and individuals working in the hire sector.

The glitzy evening attended by over 800 industry representatives were compared by well known BBC breakfast presented Steph McGovern, who brought good humour to the night.

Amongst the winners on the night was Datatag ID Limited who won Product of the Year with their newly launched system - MicroCESAR.

The Judges felt that MicroCESAR was a well thought out innovation that will assist the industry in reducing the heavy overhead associated with equipment theft that also incorporates additional value added services as part of its programme.

The 2017 Construction Industry Product of the Year award was sponsored by Plant & Civil Engineer, and GM Justin Carrigan presented the trophy to Datatag MD Kevin Howells.

Kevin Howells, on collecting his award, commented "I am delighted that MicroCESAR has won tonight's Product of the Year Award especially after winning the Plantworx Innovation Award only a few weeks ago. I'm confident that MicroCESAR will make a significant contribution to reducing theft of small power tools. We've already received overwhelming industry support and STIHL's adoption will no doubt be followed by others wishing to protect their customers."

MicroCESAR was designed to address the growing issue of theft of small power tools and just as the CESAR System is hoped to be a powerful theft deterrent and an invaluable aid in recovery.

MicroCESAR uses Datatag security marking technologies to give each piece of equipment a unique and permanent 'fingerprint' that thieves cannot remove and which provides the Police with quick and easy verification of ownership without the need for special equipment or lengthy laboratory testing.

As an added bonus the MicroCESAR system can also be used to assist in stock management and also allows users to easily access on-line health and safety advice and user manuals through the unique QR code MicroCESAR website.

STIHL announced at the Executive Hire Show back in February that it was to become the first to adopt the new security initiative fitting MicroCESAR as standard to their range of cut-off saws including all TS models which includes their best-selling TS 410 and the new Lithium-Ion powered TSA 230.

Other leading manufacturers are in discussion to follow suit protecting a range of construction and landscaping equipment such as power tools, cut-off saws, hand-held hydraulic breakers and compaction plates.