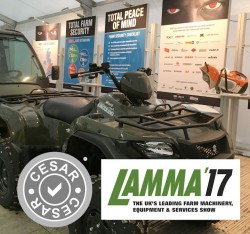 As the official CESAR Scheme enters its tenth anniversary year CESAR exhibited at LAMMA 2017. The popular two-day agricultural event in Peterborough attracted over 15,000 visitors per day.

The CESAR Scheme is the official security initiative of the CEA (Construction Equipment Association) and the AEA (Agricultural Engineers Association) which uses an array of Datatag security marking technology to give each piece of equipment a unique 'fingerprint that thieves cannot remove.

CESAR was launched at the Combined Industries Theft Solutions (CITS) conference held at JCB's Rocester HQ in 2007. Since its launch CESAR has been adopted by a veritable 'who's who' of leading equipment manufacturers including John Deere, Valtra, JCB, Manitou and Merlo. CESAR is fitted on production lines on 3 continents and now protects over 225,000 machines.

The CESAR system is recognized by national and local government agencies and supported by the Home Office and the National Police Chiefs' Council. CESAR is approved by all major insurers, offering discounts of up to 25%. NFU were also on at hand next to the CESAR stand in hall 7 at LAMMA supporting the scheme and promoting their CESAR discounts.
CESAR and Datatag will mark their success during 2017 at the Executive Hire Show, Plantworx and the BBC's Countryfile exhibition.